The question we often ask ourselves is, can dogs see colors?

About six million cones in our human eye perceive colors trichromatically. This means that we perceive the basic colors: red, blue and green. For example, if the red and blue plugs are irritated at the same time, we will perceive the light as purple.

Dichromatic eyes, however, work differently. Namely, they cannot perceive red and green so intensely. Therefore, they can only differentiate between blue and yellow. Because dogs have poor eyesight of different colors, they focus more on the illumination of objects. 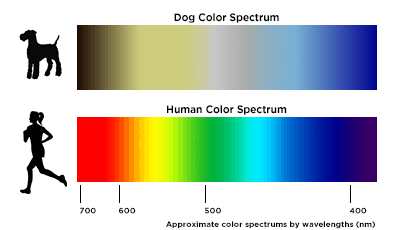 They have a lot of cones in their retina. Cones are sensory cells that specialize in light perception. Their job is to distinguish between light and dark.

The cones also determine the frequency of the flashing. Based on repetitive light-dark changes, the image can be perceived as a single image. In humans, this frequency is about 60 stimuli per second. In our four-legged friends, however, this number is significantly higher. Therefore, dogs can perceive moving objects like a flying ball much better that the stationary objects.

But how can dogs see in the dark?

In addition to the large number of cones in the retina, their eye also has a crescent-shaped reflective layer of tapetum lucidum. These are crystal-like structures located in the vessel. They can reflect light entering the eye.

How are dog eyes built?

Dog eyes are built in the same way as human eyes.

The outer layer gives the eye shape and consists of the sclera and the transparent cornea, which is directly in front of the pupil. Due to its strong curvature, the cornea also affects the resolution of the eye, which greatly affects vision.

The middle layer of the eye is called the uvea. It is divided into the iris, ciliary body and choroid: The iris gives the dog’s eye color and can narrow or dilate the pupil with the help of its muscles. This is how they regulate the entry of light into the eyes. The ciliary body regulates lens tension and changes in eye refraction. In addition, it produces ventricular water, which regulates intraocular pressure and vascular function, supplying certain tissues with important nutrients.

The retina, which lies behind the vitreous, is composed of many cell layers. Different types of cells, including rods and cones, allow the thin retina to detect light and color. Each stimulus is transmitted to the brain via the optic nerve. The brain senses the color or brightness of the stimulus and displays the image to the dog.

The most common eye diseases in dogs are as follows:

• Cataract is the result of a pathological lens disorder

• cherry-eye: enlargement and prolapse of the eyeball 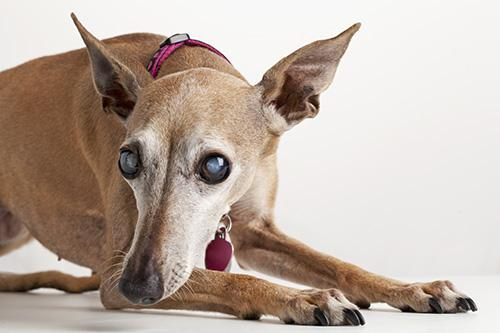 It is also worth mentioning these eye diseases, which every dog ​​owner will surely encounter at least once:

• Conjunctivitis is an inflammation of the conjunctiva and is the most common eye disease. Conjunctivitis makes the eyes red, watery, swollen and itchy. Mucous or watery pus often flows from the eyes, and the dog blinks excessively.

• Scabs and superficial abrasions can occur on the cornea of ​​the eye due to foreign objects that the dog gets into the eye, such as various grass and weed seeds that anchor behind the third eyelid and cause injury. Damage to the cornea can also be caused by hereditary conditions such as a second set of eyelashes (districhias) and eyelids that curl inward (entropy). There are also differences between breeds, some breeds are more susceptible to corneal injuries; these are breeds with a suppressed muzzle and large round eyes, whose eyes often dry out, so the cornea is subject to ulcers. Common signs of ulcers include squinting, excessive tearing, red eyes, swollen eyes, and blurred eyes.

Certain breeds have been shown to be genetically more prone to eye problems, such as glaucoma or progressive retinal atrophy. Today, there are already quite a few genetic tests for hereditary eye diseases that most commonly occur in a particular breed.

However, prevention is still considered the best cure – check and clean your pet’s eyes regularly.

You can use Arava’s cleaning wipes for cleaning. If you notice anything unusual, do not hesitate to visit a veterinarian.

Tags: aravadogseyes
We use cookies to ensure that we give you the best experience on our website.OkMore