It’s probably not escaped your notice that dogs tend to smell pretty awful after getting wet. Why is that? Chemistry and biology combined can help explain.

We have all experienced this before – a summer day, a ride to the river / lake and a refreshing swim for you and your four-legged friend in the clear cold water. Then there’s the tedious drive home when you’re trying to keep looking at the road, even though you’ll soon faint from the smell of a wet dog.

Andy Brunning, a British chemistry teacher, distilled the essence of complex molecular reactions into an infographic published on his blog Compound Interest. This is just one in his series of infographics that offer scientific explanations of odors that heal or attack our nostrils on a normal day, such as a new car, a toilet, coffee, freshly cut grass, and bacon.

One of his infographics is also the smell of a wet dog. When you’re taking your dog for a walk, you’re actually taking a whole host of microorganisms for a stroll too. These bacteria and yeast dwell quite happily within your dog’s hair, doing whatever it is microorganisms do, and in the process producing a range of volatile organic compounds. This is the genesis of what will become the olfactory assault of wet dog smell.

If these volatile organic compounds are being produced all the time, you might wonder why wet dog smells so much worse than a dry dog. Water itself has a hand in this; it helps to break down the micro-excreta of the bacteria and yeast in the dog’s hair. As the water evaporates from the dog’s hair, it can carry with it some of the volatile compounds, allowing them to reach your nose. As the water evaporates, it also increases the humidity of the air surrounding the dog, and as humid air is able to accommodate a higher concentration of smelly molecules, the effect is further intensified.

Perhaps unsurprisingly, there hasn’t been a great deal of research on the smell of wet dogs, but a pilot study was carried out several years ago to compare the differences between compounds emitted from the hair of dry dogs and that of wet dogs. The study identified a number of compounds whose concentrations were observed to increase when dog hair was wet; these encompassed a whole range of independent odours, from ‘sulfurous’, to ‘medicinal’, to fruity, and ‘earthy’. They also found that the concentration of some compounds increased more drastically than others. 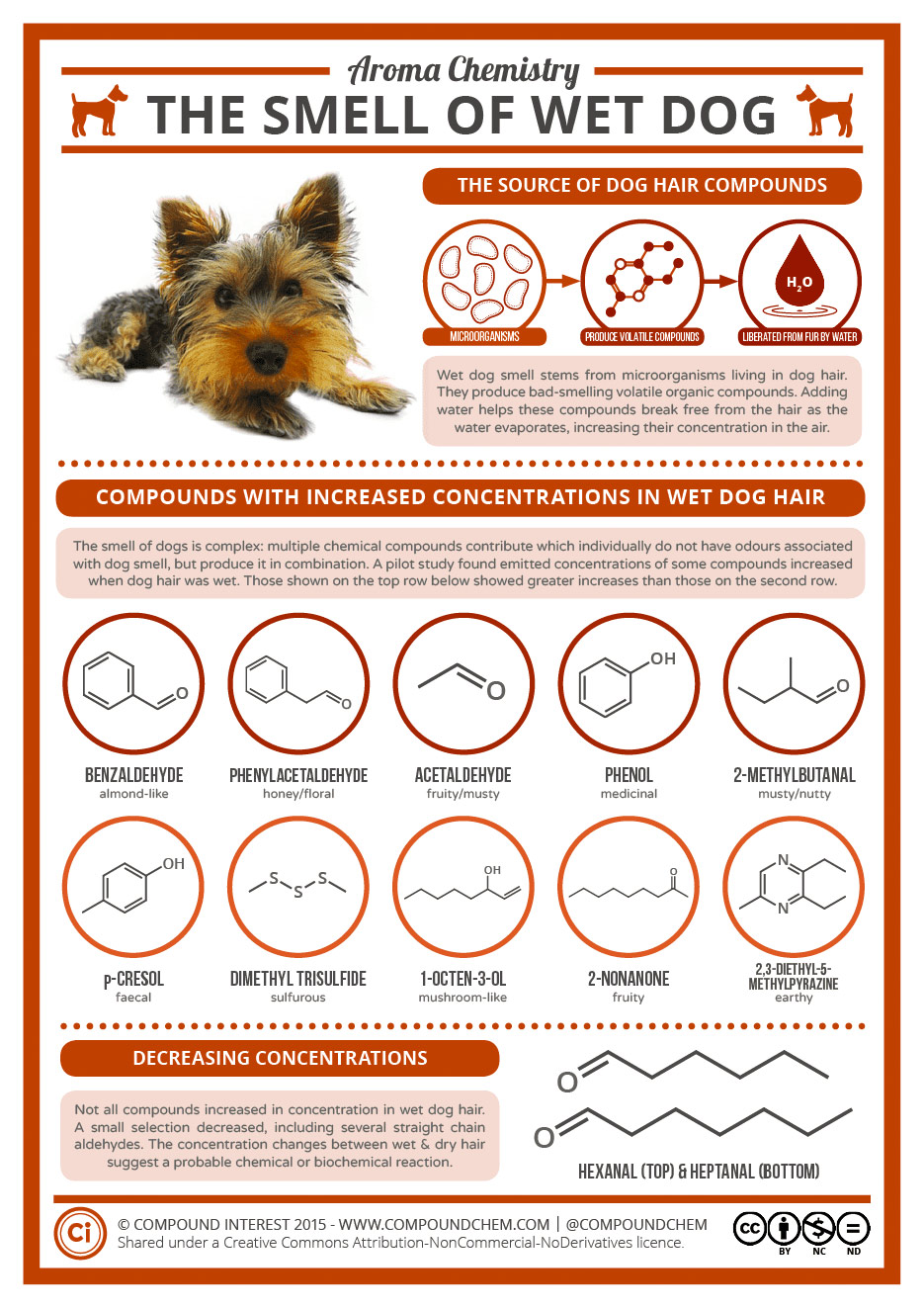 All this adds up to a pretty complex pattern of changes, and, on the basis of this study alone, it’s quite hard to identify the exact compounds that make a wet dog smell so much worse than a dry dog. However, we can discern that it’s certainly as consequence of the varying concentrations of the numerous compounds involved.

Until then, we at least know that it’s not the dogs themselves we should be blaming for smelling terrible, but rather the microorganisms they carry.

Tags: dogsstink
We use cookies to ensure that we give you the best experience on our website.OkMore